Morel season is one of the most exciting times for us mushroom hunters and it’s the best way to shake off the dust and the cold from this past winter.

In case you’re wondering, the first morels to be found this year on this sightings map from thegreatmorel.com/sightings  was from March 10th!

I find that by studying the previous year’s sightings, you can glean some pretty good information about how the next year will pan out for our delicious morels.

Here’s the map for this year and so far there’ s been 42 sightings.

*For an up to date map, click on this link!*

This map is courtesy of TheGreatMorel.com and it’s the map I usually find myself at this time of year.

If you’d like to submit a sighting to this map, you can reach out to the coordinators at Sightings@thegreatmorel.com.

As mentioned before, it’s prudent to get a good idea of what last year’s sightings were like so try out their 2017 sight map!

What’s so valuable about these maps is that you can see which areas are likely to start popping up with morels first.

Another aspect of these maps is that you can see how the morels move as the season goes on.

If you look at the dates, you’ll find that as the season goes on, morel sightings start moving from the south, northward.

These are just a few attributes that morels have and it’s up to you to study on your own and learn what their habits are like for your area.

“Fire Morels” are a hot trend especially if you live on the west coast where you can count on yearly wild-fires and burns.

This past year 2017 had record number of fires that even a “state of emergency” had to be declared in some states.

For us morel hunters, this should excite you despite the fact that these fires induced massive destruction wherever they trailed.

I was only able to grab maps from a couple western states but they should be pretty good at providing a good starting point for hunting the morels.

*Credit  to modern-forager.com for this map*

According to this article, there were 1,903 fires, 1,060 square miles burned, $340 million spent on firefighting costs.

Those are insane numbers!

Major areas and natural attractions were scourged from these fires.

Some of these places include the Columbia River Gorge, Mount Jefferson, and the Three Sisters.

As for the Mount Jefferson Wilderness, it is poised to reopen this Spring and Summer 2018.

Again, there’s no understating the severity of these fires.

Luckily for us morel hunters, we can look forward to fire morels popping up in these areas for at least the next couple of years.

*Credit to modern-forager.com for this map*

The Thomas fire was the largest of the fires that blazed through Northern California in September.

CNN said that the Thomas fire was four times larger than the Tubbs fire that occured in Napa and Sonoma counties in October.

By looking at this map, there are plenty of forests to visit in terms of morel mushroom hunting. 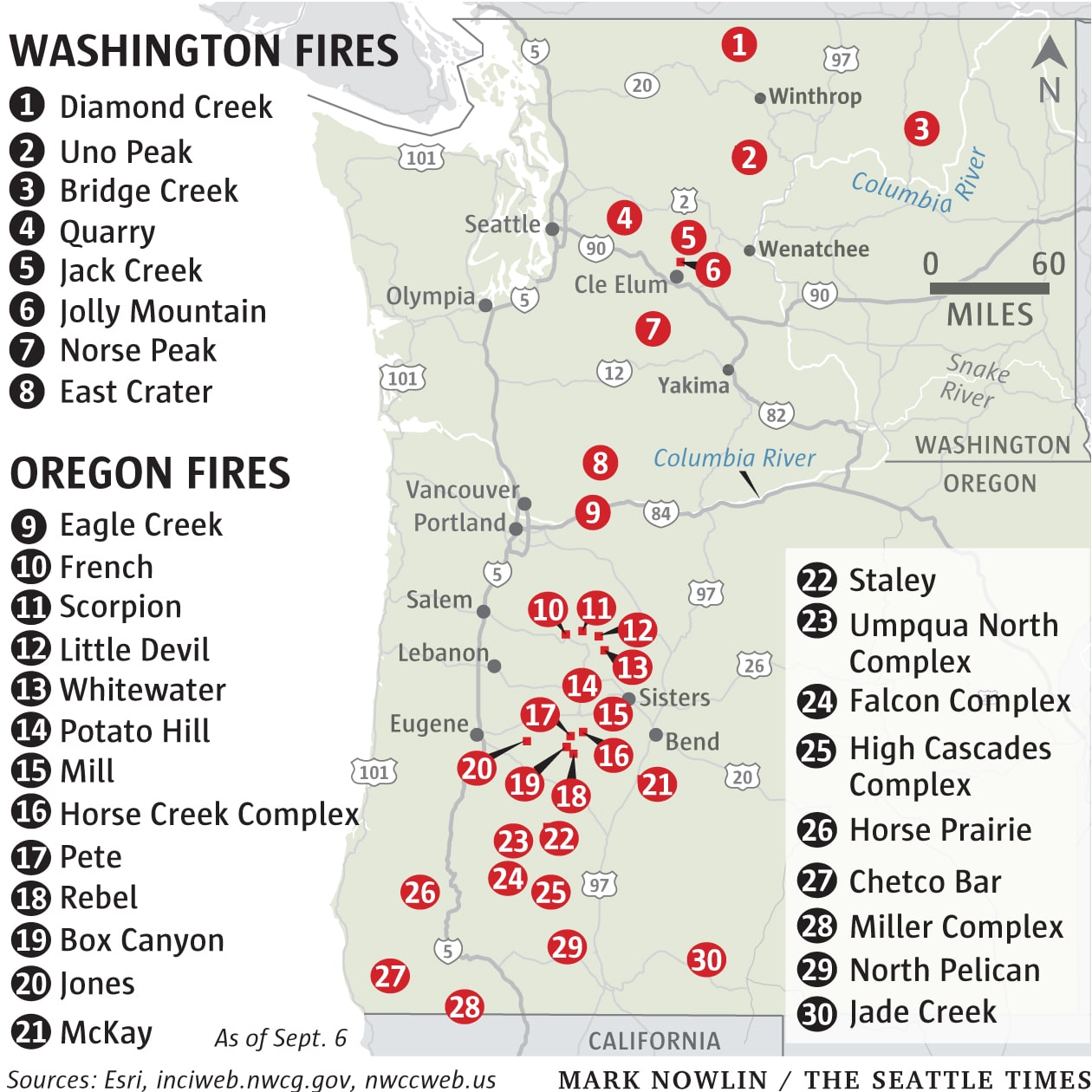 Here is a photo of the fires that affected Oregon and also parts of Washington state.

What’s great about this photo is that they included the names of the specific areas in which the fires blazed through.

This should help creating a more localized search when you’re hunting morels in these areas. 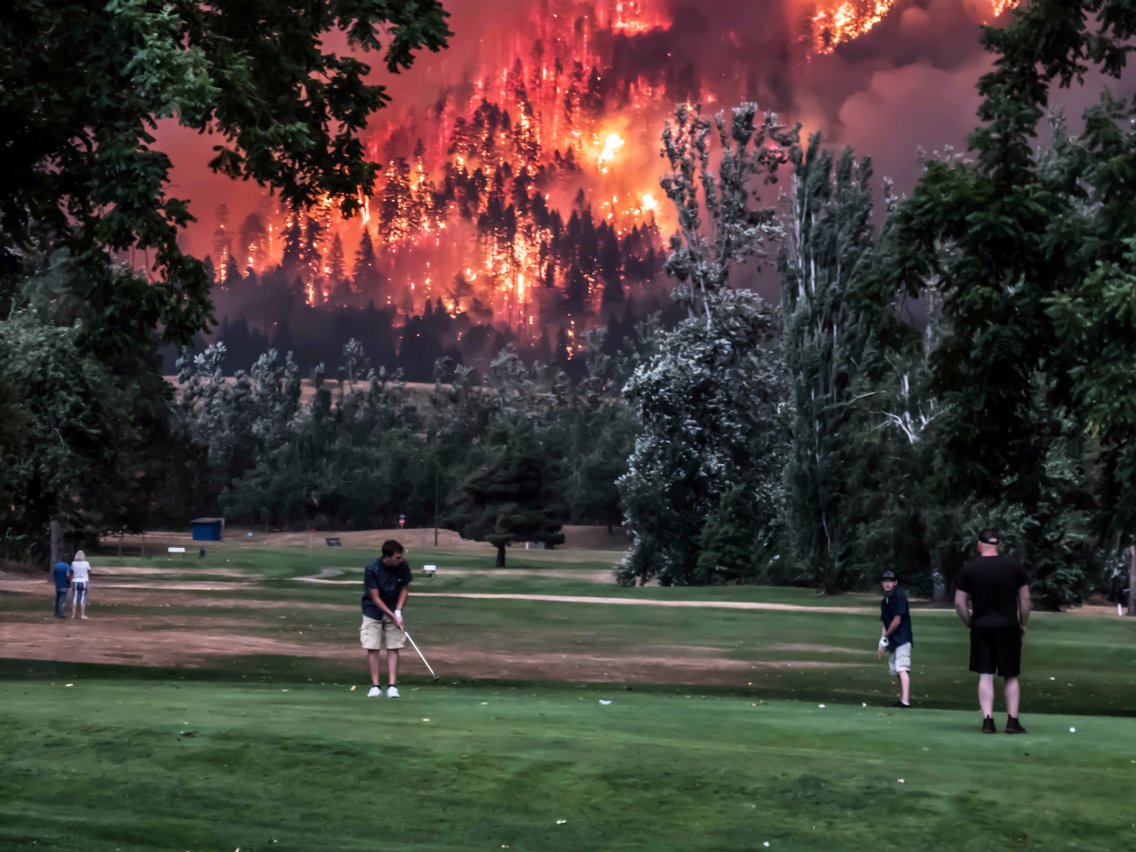 I just wanted to include this crazy photo of golfers playing at the Beacon Rock Golf Course in Washington.

It’s almost as if they’re used to it by now…. 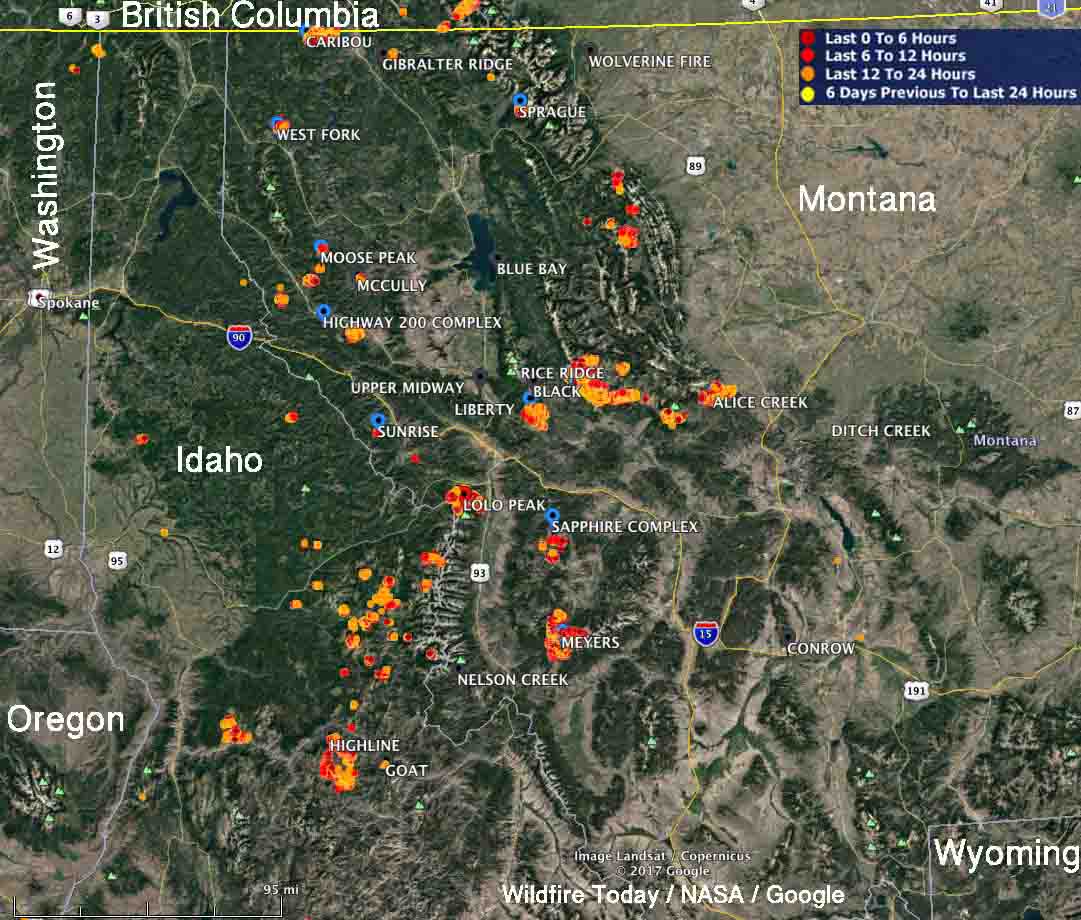 It was harder to find burn maps for Idaho and its neighbors, but in case you’re wondering, wildfires occurred in parts of Florida, Georgia, and British Columbia as well as the states I’ve already mentioned.

This snapshot is a satellite image layered with depictions of where the wildfires occurred in Montana, Idaho, and Oregon.

Satellite data is always cool to look at and this one also includes a legend in the top-right corner to give you an idea of how long these fires lasted on September 3rd 2017.

These massive wildfires lasted for days if not weeks.

Great for morels, not so great for the forests and the local citizens that had to breath in the smoky air.

Hopefully these maps are a decent indication of where morels could be popping up, and where people have started to find morels already this year.

If it’s your first year hunting morels, the best advice I could give is to do your own research!

Once you’ve done that, the next best advice is to find someone in your local area who can mentor you in the ways of morel hunting.

You can likely find these people by attending you local mycological society if you have one.

If you’re not sure if your area has a mycological club, you can check out this link from the North American Mycological Society which lists all of the clubs that exist in the U.S.A.

Don’t be afraid to meet people and good luck hunting this year!

The elusive morel doesn’t have to be all that…

Find these maps helpful? Leave me a comment if you have more maps that could go on this blog post!